The summer of 2002 was a strange time in East London. A time before social media, before so many of the grassroots venues had been shut down. Suddenly, rock ‘n’ roll exploded out of its late-90s, post-Brit Pop doldrums. Kids everywhere were forming bands. Most of the groups that burst out of this chaotic, creative melee flamed briefly, then faded away. But Razorlight was different. The band initially came together after vocalist/guitarist Johnny Borrell decided to move away from his previous acoustic work and join forces with guitarist/vocalist Björn Ågnen. 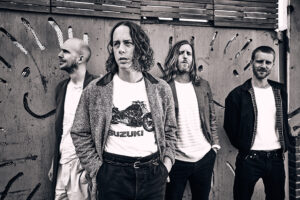 Known for their post-punk-influenced sound and a Police-influenced backbeat. Razorlight first emerged with 2004’s “Up All Night”, showcasing their raw talent and evincing an amalgam of influences from the Strokes to Television. It also carried a couple of breakthrough, era defining hits, including “Golden Touch” and “Somewhere Else”.

With their self-titled follow-up, Razorlight truly made the leap onto the international stage. Lead single, “In the Morning”, reached number three in the UK, and “America” went straight to number one. The band headlined festivals, toured the world and sold millions of albums. Johnny appeared on the cover of Vogue and enjoyed a playfully fractious relationship with the national press. A third album, “Slipway Fires”, would provide top-ten singles across the UK and Europe.

But, across the music scene, the original fire of that 2000s guitar explosion eventually burned itself out. Cutting edge music, abandoned guitars in favour of grime and dance. However, the space at the top of British music for ambitious, fun, inspiring rock music remained open. In 2018 Razorlight came storming back with their explosively exuberant album, “Olympus Sleeping”. As Johnny described it,

“I made the record in a spirit of nothing but enjoyment. This album was my very pure love letter to a certain type of music – the music that first inspired so many people to form and follow bands.”

The band promptly delivered on these promises. “Got To Let the Good Times” fizzes, pounds and bursts the album into life – leading straight into the slick grooves and jangling hooks of “Carry Yourself” and “Brighton Pier”. Before we’re nine minutes in, we’re reminded exactly of what always set Razorlight apart. That unique ear for a smashing pop melody, and the energetic focus in performance that almost no one else since has matched.

The Summer of 2019 was a massive year for the band as they continued to grow supporting Noel Gallagher on outdoor shows and played in excess of 20 festivals in the UK and Europe, drawing huge crowds and lifting people onto shoulders from Portsmouth Victorious to Evreux in France. The band now command over a million monthly listeners on Spotify. Their late summer 2019 single “Cops and Robbers” took them on an early Roxy Music diversion. In May 2020 they dipped into their vaults to release the 2009 track “Burn, Camden, Burn” to coincide the song’s use in the Apple TV show “Trying”.

At the end of 2019 original guitarist Bjorn Agren took back to the stage with the band and transformed their December shows into a glorious re-union. The legendary Bjorn is once again working closely with Johnny on new material and if the rapturous reception given to their January 2020 arena tour slots as special guests with Kaiser Chiefs is anything to go by, Razorlight are very much re-born. Having such an amazing band perform live at Wild Roots is something all of us here cannot wait to experience on the June bank Holiday Weekend 2022.