Violet Skies is the amazing singer, songwriter, and producer who delivers her lyrics with a soulful allure and a tendency toward intimate lyrics and dramatic melodies. Violet also known as Hannah Berney from the Welsh town of Chepstow in Monmouthshire. According to Hannah herself in an interview back in 2016 she uses the alias because “Violet was my great grandmother and she was an incredible lady, hopefully I’m doing her name justice. Skies just suited the music I make, and I like that it’s a little ambiguous”.

Before she began using her alias “Violet Skies” Hannah was a contestant on the 2012 inaugural season of The Voice UK. She would go on to make it as far as the second week of live shows with performances of songs made famous by the likes of Lady Gaga and Justin Timberlake. 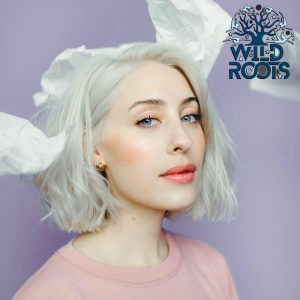 Over a year later in January 2014 she released her debut single “How the Mighty” and by June, released the debut solo EP, “Dragons”. The title song, Dragons, displays Violets raw talent and the whole range within the EP, with contrasting elements between gentle synths and serene vocals that begin the track. The highly rhythmic, pop beats during the chorus showcase the versatility of Violet’s sound. Going on to perform live at the Glastonbury Festival on the BBC Introducing Stage that summer. Violet then rounded out the year with a headline act at a London show and later opened for “A Great Big World” at Bush Hall in Shepherd’s Bush. Also, within 2014, Violet featured on both the EP Chasing Honeybees and album Dissolver, with Bristol based producer Stumbleine (aka aka Peter Cooper) through Monotreme Records.

She followed those with festival appearances across the U.K., returning with the single “Jealousy” in early 2016 shortly before playing her first showcases at the SXSW festival in Texas. The seven-track This Was Us arrived on Saiorse Records in 2017.

By June 2019, Violet released her new EP I’ll Buy a House, which contains four of her new singles. One of which was her biggest streaming hit yet with the single, “Is She Gonna Be There?” check it out below. It received over a million streams alone before appearing on the EP. So far, 2020 has not slowed down violet having co-written the song “God Is a Dancer” for the British singer Mabel and the Dutch DJ Tiësto. By April she has also released her newest EP, Lonely, containing five songs: “Lonely”, “Nothing at Night”, “Half My Life”, “Born on Valentine’s Day” and “This Could Be Love”.

Violet is also the co-founder of She writes the international all-female song writing camp initiative in an interview with LDN magazine she had this to say about the initiative:

“I co-founded it with Charlie McClean, and we run camps/curated sessions all over the world with the intention of giving the best of the best space to make friends, make all-female-created songs and make an impact on the charts and the award shows. We’re out here trying to change the industry and we’re not quiet about it.”

So far, the initiative has gone from strength to strength having held camps across the globe in London, Spain, Stockholm, Tokyo, Berlin, LA and even one in Reykjavik! With such renowned success in the music industry the future looks very exciting and we cannot wait to see Violet perform at Wild Roots in 2021, Slán go fóil.